First of all we need to make a correction, last month we reported that Edmonton’s inaugural year was 2003, sorry folks it was 2004. Many great things started in 2004 which included the expansion to Edmonton. We started sharing a photo gallery so you could all share and see the good times we’ve had. Our loss of Nancy Morrison spearheaded the first Cottonwood Classic which was held in support of The Canadian Breast Cancer Foundation. This event featured some firsts for us, Shepherd Health offered us the benefits of ART, Active Release Therapy, prior to us teeing off and breakfast was sponsored by Cordell’s Point of View. We had two Mulligan men who washed our clubs, drove like Tiger and looked like the Chippendals, well maybe a little exaggeration. Our first Silent Action and balloon game, remind me never to do the balloon thing again, were also very successful. Our Fernie tournament in Aug also included an optional extension to Meadow Lake Montana which many of us enjoyed. The weather in both locations was certainly a challenge but we made the most of it and had a blast as always. In 2005 we returned to Fernie, thinking it couldn’t be as bad as 2004, guess what it was worse. Imagine rain, snow, power outages and closed golf courses. Some of us were escorted around the dark hotel not by the light of the moon but by the light of the miner’s helmets, it was so much fun. 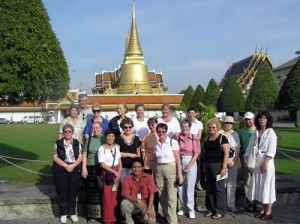 In February 2003 we traveled to Thailand and it was amazing. We experienced the splendor of the temples; the myriad of smells at the flower and food markets; and the uniqueness of the canals that once were the streets of Bangkok. From the hustle and bustle of the city of Angels we traveled south to Cha Am and Hue Hin. These relaxed coastal towns boasted long uncluttered beaches and some great golf courses .Following our sojourn here some of the group went north to the ancient walled city of Chang Mai while others went on to Hong Kong, Osaka, Singapore Koh Samui and Phuket. It was a fantastic experience and the harbinger of many other unique experiences to come………so many places on my bucket list and so little time. 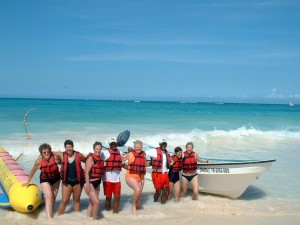 In February 2005 26 lucky people escaped to the tropical paradise of Punta Cana. The group experienced quading, banana boating, snorkeling and much much more.The golf too was wonderful and some even got to try out the renowned Teeth of the Dog Golf Course. Di was not here as she had her hip replacements so Kristy was questioning if she should spend so much to play there. Sylvia Madder told her “ Di won’t know just go for it” Kristy informed her that Di would know as she did the finance and would see the credit card charges. She went anyway and good for her you have to grab opportunity when you can.

As most of you will remember 2005 certainly had it’s challenges with the first flood causing much devastation for many of the courses and also for many of our population both in Calgary and the surrounding areas. In June we held our first Challenge Cup at Lacombe and yes it was wet, very wet, so wet in fact we saw someone drying their undies with the hand dryer.

Keep Up With All the Latest Golfaround News & Events!

Sign Up for Our
Ladies Golf League &
Golf Lessons for Women

Sign up below to have news updates delivered directly to your email inbox.

It's the perfect stocking stuffer for the golf-lovers on your list (or to treat yourself).